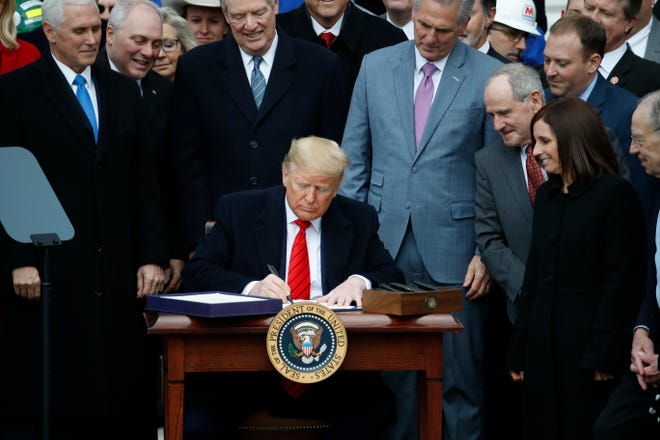 WASHINGTON – Still facing a divisive impeachment trial in the Senate, President Donald Trump celebrated a rare bipartisan achievement Wednesday when he signed into law a revamped trade deal with Mexico and Canada.

Surrounded by business leaders wearing hard hats, Trump portrayed the new U.S.-Mexico-Canada Agreement, or USMCA, as "a colossal victory" for American farmers, manufacturers and other workers.

"For the first time in American history, we have replaced a disastrous trade deal that rewarded outsourcing with a truly fair and reciprocal trade deal that will keep jobs, wealth and growth right here in America," Trump said during a signing ceremony on the White House South Lawn.

Trump gave a shout-out to more than two dozen Republican lawmakers whom he credited with helping push the deal through Congress.

Left off of his list of plaudits and missing from the celebration: Congressional Democrats, who put their own stamp on the agreement and whose support was pivotal to helping it secure congressional approval. House Speaker Nancy Pelosi's office said no Democrats were invited to the ceremony.

The revised trade deal, one of Trump's top legislative priorities, is the product of months of negotiations and replaces the North American Free Trade Agreement, or NAFTA, which essentially eliminated tariffs on most goods traded among the three countries.

The agreement guarantees U.S. farmers greater access to Canada's agriculture market and puts new e-commerce rules in place. It also dictates that a higher percentage of autos be made from parts manufactured in North America and requires that at least 40% of vehicle production be done by workers earning at least $16 per hour.

In addition, the pact, which is supported by labor unions and business groups, includes stronger provisions on labor, enforcement and pharmaceuticals that Democrats had sought as a condition for their approval of the agreement.

Get comprehensive data on your material inventory whenever you need it. Our system lets you view entry number, merchandise PO number, weight, inspection status, numbers of pieces/pallets/cartons, merchandise descriptions, receipt dates, tracking numbers, number of days in the warehouse and more. Contact us today for a FREE quote

Brownsville officials were among Rio Grande Valley economic development leaders who signed a bi-national collaboration agreement on March 5 between South Texas and the state of Tamaulipas, Mexico, aimed at boosting economies on both sides of the border.

The initiative was led by the Rio South Texas Economic Council and the Ministry of Economic Development of the state government of Tamaulipas, with the signing ceremony in Weslaco. Besides officials from Brownsville, also participating were economic development leaders from Alamo, Donna, Edinburg, Harlingen, Hidalgo, Laredo, McAllen, Mission, Palmview, Pharr, Roma, Rio Grande City, San Benito, Sullivan City and Weslaco.

According to RSTEC, the agreement is intended to strengthen investment recruitment and job creation in communities north and south of the Rio Grande.

Mario Lozoya, executive director of the Greater Brownsville Incentives Corporation and one of the agreement's signatories, said the agreement was forged partly in response to a situation with U.S.-owned maquiladoras (industrial plants) in Matamoros that has prompted some of them to relocate to the United States or Mexico's interior.

A mandate from Mexico's new president, Andres Manuel Lopez Obrador, doubling the minimum wage along a narrow strip of the country's northern border, led to a dispute between labor unions demanding higher wages for employees making above minimum wage and "maquila" management, who refuse to raise wages, arguing that their employees were already making the wages Obrador sought to bring about.

Another piece of Obrador's northern-border program entailed slashing the value-added tax on maquilas in the border region so they could afford the wage increase. At any rate, tens of thousands of maquila workers have walked off the job in Matamoros. 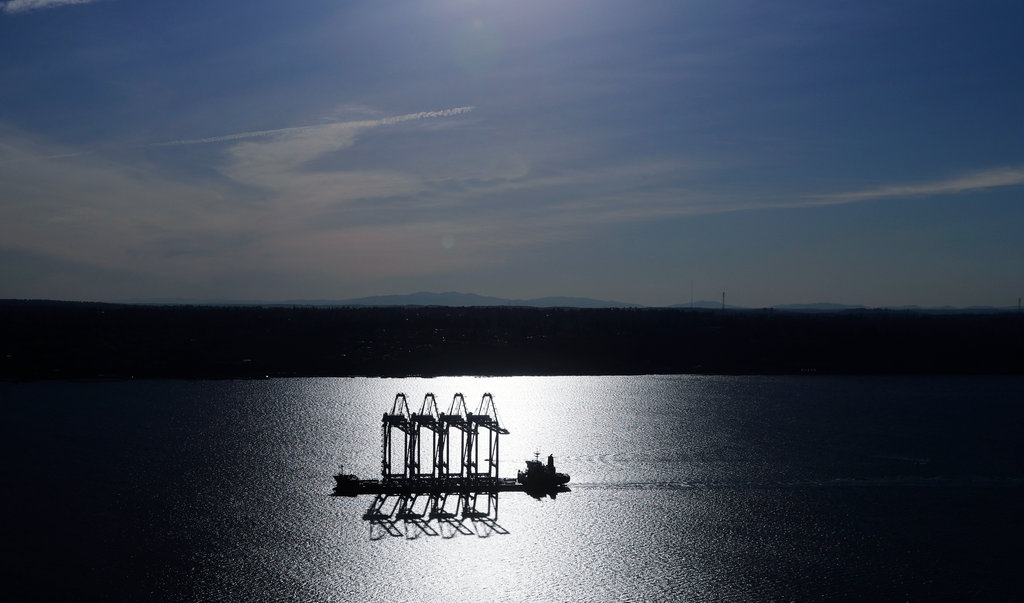